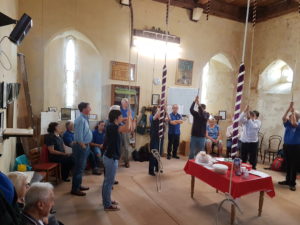 I am pleased to report that the captains of each team entering the 6 bell on Alderney on Sept 16th have now received a Hawkear printout of each of their team member’s individual performances
Here on Alderney we have been working with these printouts for some time and are gradually making more & more use of them as our ringing improves. Routinely we record all Service/Performance ringing and as long as we remember to keep a list of who rang where we find it very helpful in reducing an individual’s consistent errors. We have also learned that Hawkear won’t analyse anything if we don’t all stand on the command ie if some bells strike in more rows than others it can’t cope & if the tenor cover is very very slow it puts it as leading for the next row instead!! In this way it gently reminds us that it was designed for the National 12 bell competition but these reminders are becoming less frequent. Interestingly it can’t manage half muffled ringing – the lines generated looked like a work of modern art☺
So that everyone has something to aim for I am pleased to announce that Hawkear has crowned Justin as The Best Ringer of the Day with a most impressive individual score – 27 – while ringing the tenor of the back 6 to Cambridge!!! – many congratulations☺